You are here: Home1 / Religious 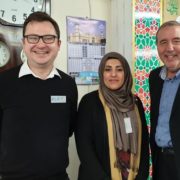 A Muslim woman has been empowering isolated women through a charity for five years and hopes to tackle the “increasing number of challenges Muslim women face” – such as Islamophobia, domestic abuse and male dominance in mosques.

Saema Mohammad founded the charity, An-Nisa Network, after moving to Nottingham from the west of Scotland with her husband and having her second child in 2012, where she found herself feeling “isolated” from the community. Read more… 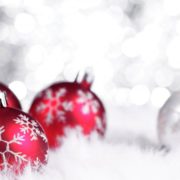 What Christmas means to me as a Muslim

Jesus (Eesa) from a Muslim’s Perspective

Jesus was born to Mary (Maryam, pbuh). Mary was from a pious and devout family, niece of prophet Zachariah (peace be upon him) and cousin of John the Baptist (Yahiya – peace be upon him).  Mary devoted her life to the worship of God in the holy sanctuary in Jerusalem.  She was visited by the angel Gabriel (Jibraeel) to give her the news about the birth of a child named Jesus (Eesa, pbuh).  This shocked Mary (Maryam), who questioned how it was possible for her to have a child when no man had ever touched her (Quran 19:21).  Thus, she withdrew from people to hide her pregnancy and when she finally delivered the baby, she was commanded by God to go back to Jerusalem with Jesus.

When Mary (Maryam, pbuh) was reproached by people for committing a sin, she pointed towards Jesus (Eesa, pbuh) who spoke that he was appointed as a prophet by Allah (Quran 19:30-33).  Through Jesus, God wanted to revive the true message of Prophet Moses (Musa, peace be upon him) and all other prophets who had been sent before Jesus.  The message of all prophets was the same: to believe in the oneness of God, to worship God and to follow God’s commandments.

Prophet Muhammad (pbuh) was always respectful towards people from different faiths.  Therefore, as Muslims we follow his guidance.   We embody the values of generosity, spirit of togetherness, sharing food and company.  As such, the fact is that Muslims do the same as everyone else who is not a practicing Christian at Christmas.  We re-charge our batteries, spend time with loved ones and enjoy the festive period.   There is usually a lot of food involved too!!

This year, An-Nisa (The Women’s) Network and Green Academy Trust are visiting Cherry Trees Residential Home and The Oaks Residential Home to extend the sense of togetherness and unity by spending time with them and sharing gifts.  If you wish to either donate or volunteer your time to this project, get in touch with An-Nisa Network team. 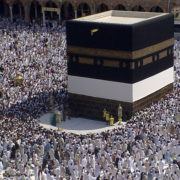 Hajj and Eid-ul-Adha (Festival of Sacrifice)

Hajj is the name for pilgrimage to Makkah, Saudi Arabia, Islam’s holiest site. It is the fifth of the Five Pillars of Islam and is an obligation for all Muslims, at least once in their lives, as long as they are physically able and can afford it.

Hajj occurs in the month of Dhul Hijjah, which is the twelfth month of the Islamic lunar calendar. The pilgrimage to Makkah reminds Muslims of their key belief in the equality of humankind before Allah (Arabic word for God), because each person takes part in worship and rituals on exactly the same basis. Every year, over two million Muslims will make the pilgrimage.

Hajj prompts Muslims to reflect and think on their own lives. Modern lifestyles are hectic, but Hajj gives Muslims the opportunity to switch off from work and everyday issues. It also allows Muslims to reconnect with what is really important and focus on spiritual matters.

One of the most famous ritual is that Muslims all must circle the huge black cube in Makkah – known as the Kaaba , which was originally built by the Prophet Ibrahim, known as Abraham to Jews and Christians.

As a sign of consecration, Muslims wear very simple white clothes. Men wear seamless long white robes while the women wear plain white dresses (or sometimes coloured) with scarves. These are symbolic of the equality of all people in the eyes of Allah and to signify parity between rich and poor.

After the rituals of Hajj are completed, Eid-ul-adha (Festival of Sacrifice), also known as the Greater Eid is celebrated. It is the second most important festival in the Muslim calendar, (the first being Eid-ul- Fitr after the month of Fasting – Ramadan).

Islamic scripture tells how Allah commanded Prophet Ibrahim to sacrifice his son as a test of his devotion. Despite his love for his child, Prophet Ibrahim duly prepared to carry out Allah’s command. However, at the last moment, Allah tells Ibrahim to spare the child and sacrifice something else instead. In remembrance of Ibrahim’s willingness to submit himself to the divine will, Muslim families traditionally sacrifice an animal during Eid al-Adha.

This story is also found in the Jewish Torah and the Christian Old Testament (Genesis 22). Here God asked Abraham to sacrifice his son Isaac, his son with Sarah. Isma’il was his son with Hagar.

Muslims all over the world, who can afford it, sacrifice an animal often a sheep as a reminder of Ibrahim’s obedience to Allah.

The meat from the sacrifice of Eid al-Adha is mostly given away to others. One-third is eaten by immediate family and relatives, one-third is given away to friends, and one-third is donated to the destitute. The act symbolises our willingness to give up things that are of benefit to us or close to our hearts, in order to follow Allah’s commands. It also symbolises our willingness to give up some of our own bounties, in order to strengthen ties of friendship and help those who are in need. We recognise that all blessings come from Allah, and we should open our hearts and share with others.

On the day Eid, my day starts with dressing myself and my boys in new outfits and going to the Mosque for congregational Eid prayers. We then spend the rest of the day with loved ones, visiting family and friends, offering them presents. As a young girl, I remember going with my parents to collect meat from the butchers and distributing this to family and friends followed by a family feast cooked with one third of the meat at home in the evening. Now I see my children look forward to Eid and treasure the gifts that they receive and the happiness they enjoy twice a year with the two Eids. It really is such a delight. 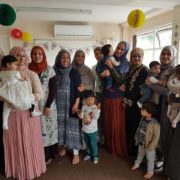 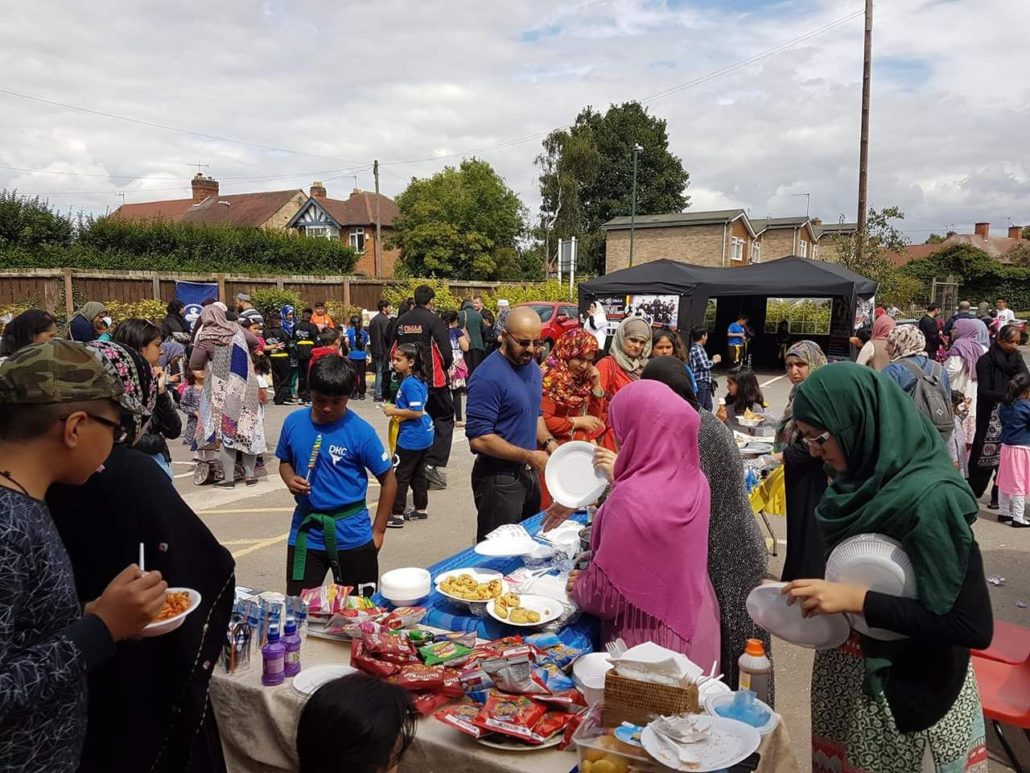 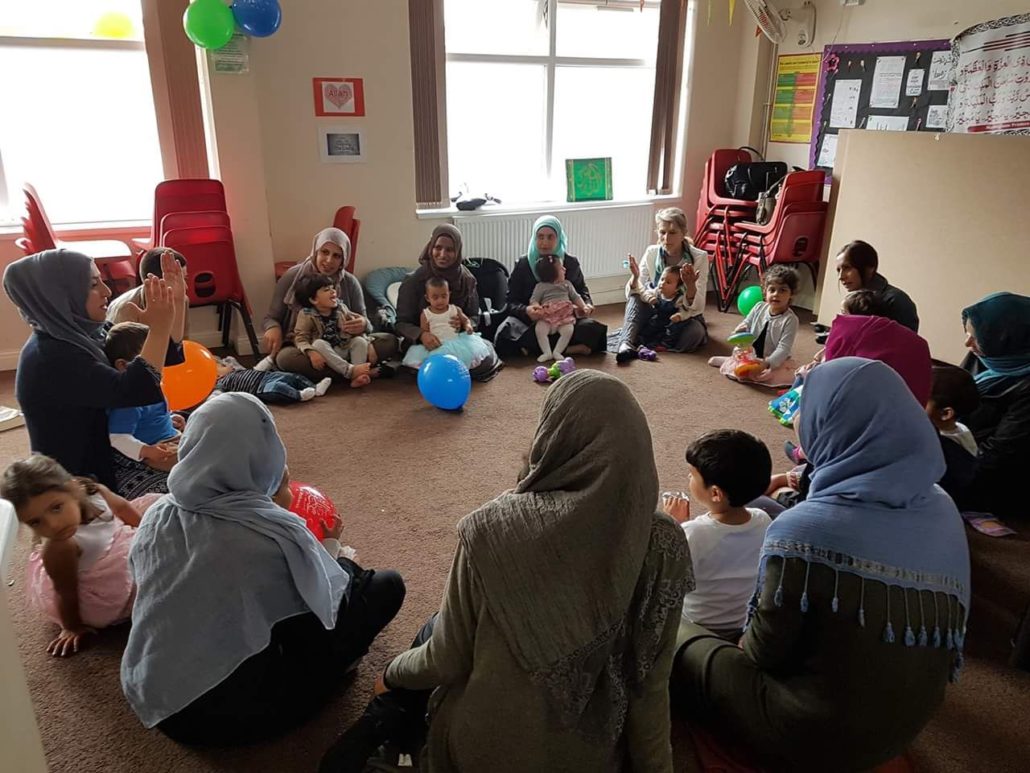 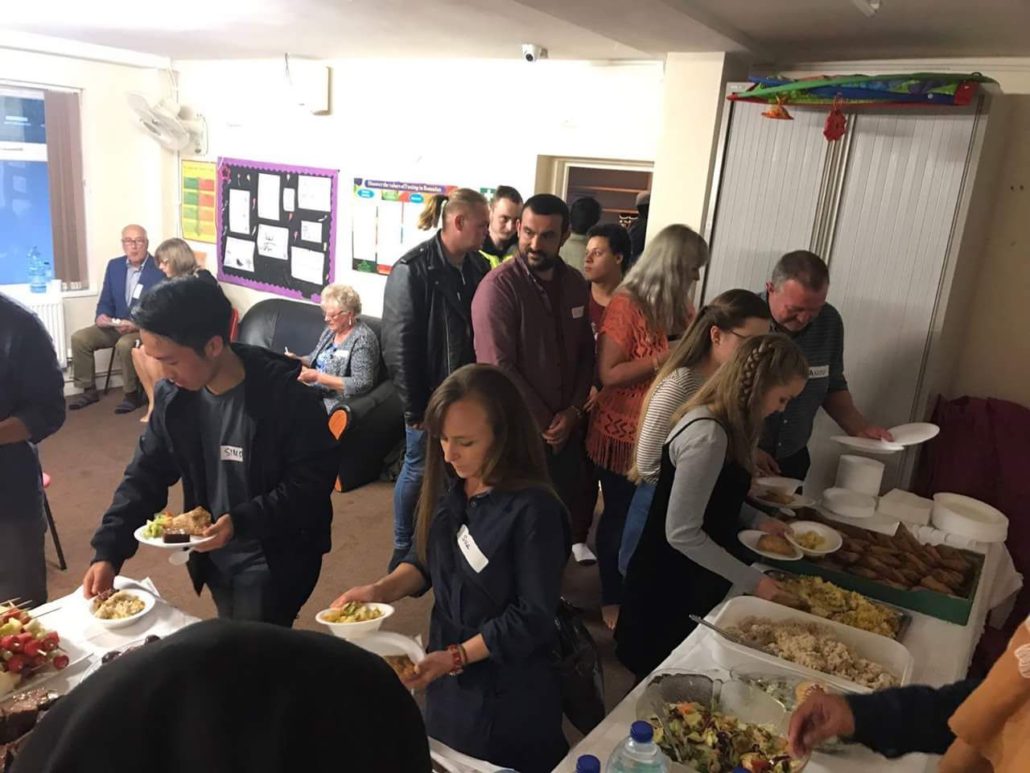 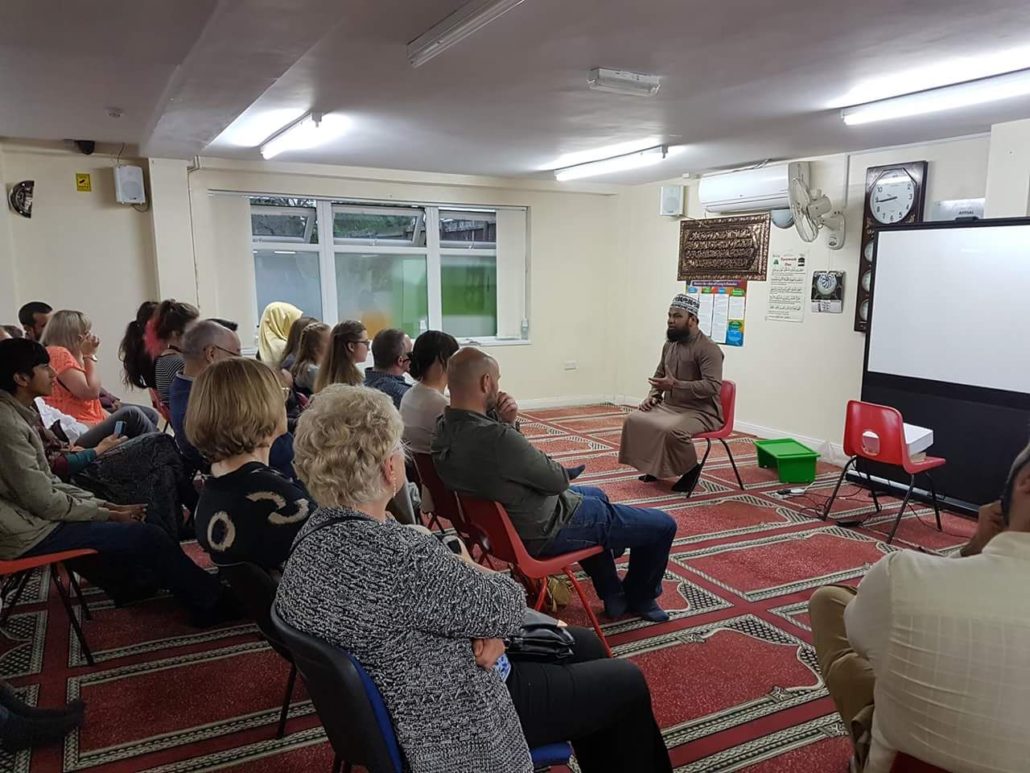 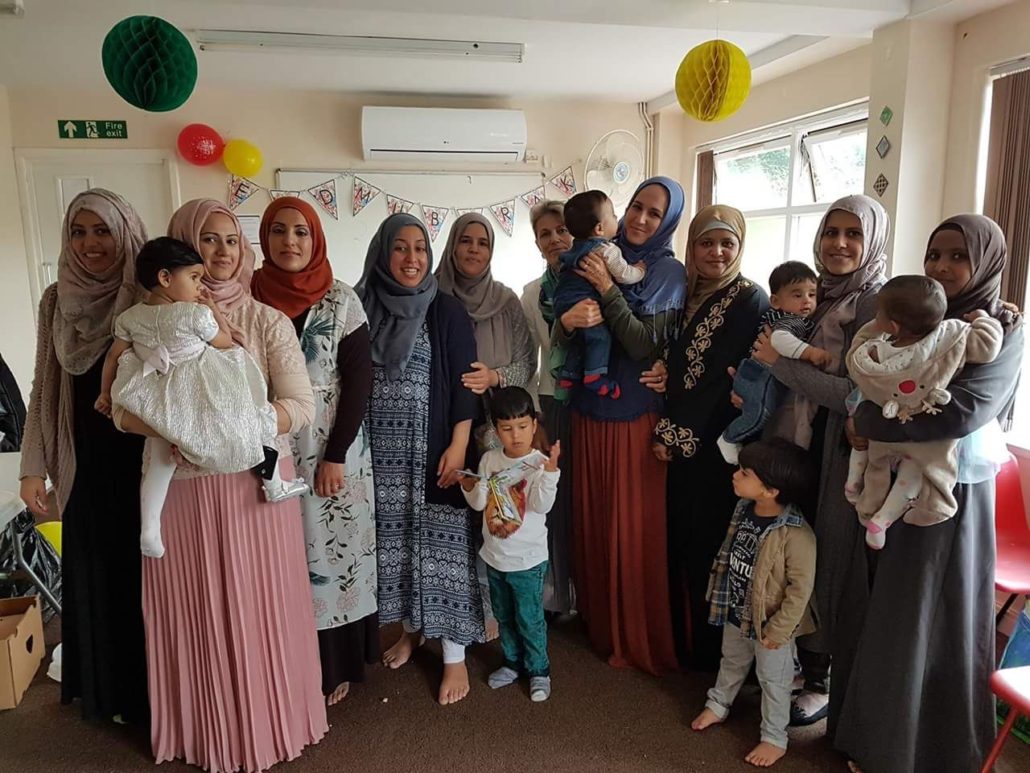 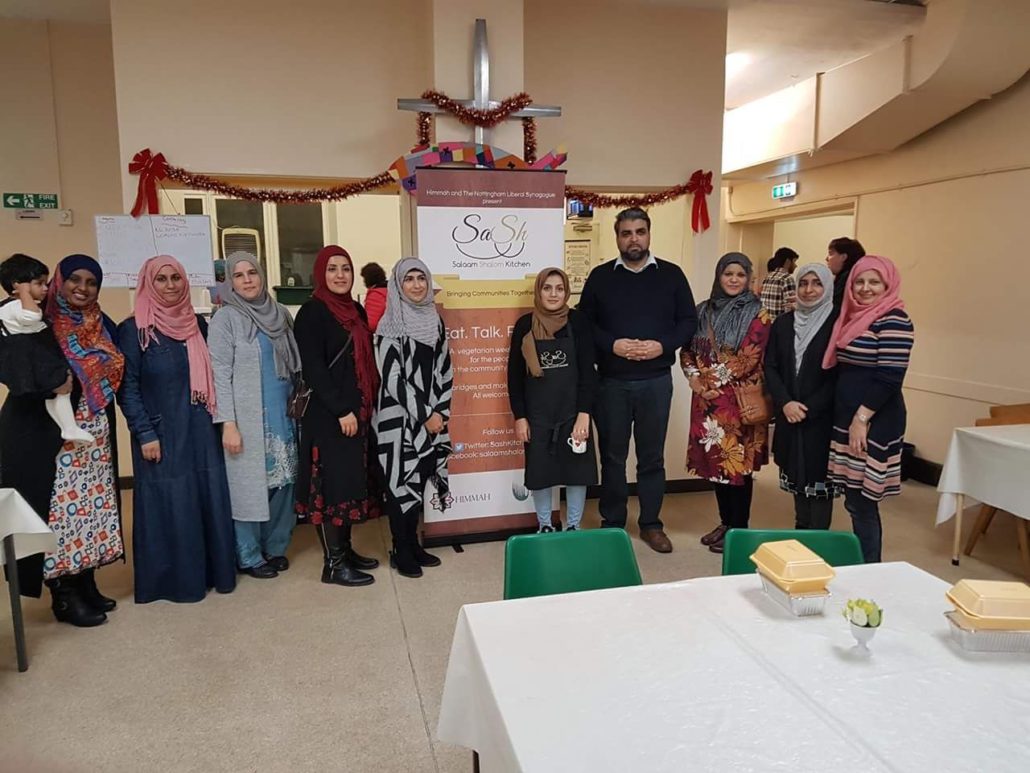 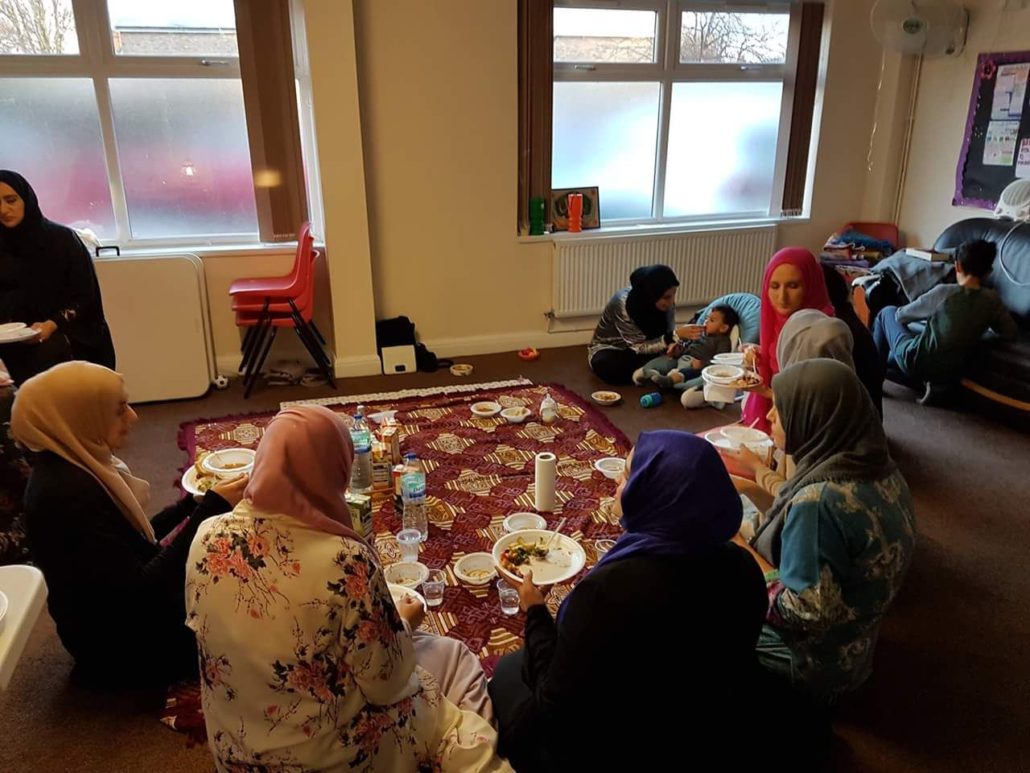 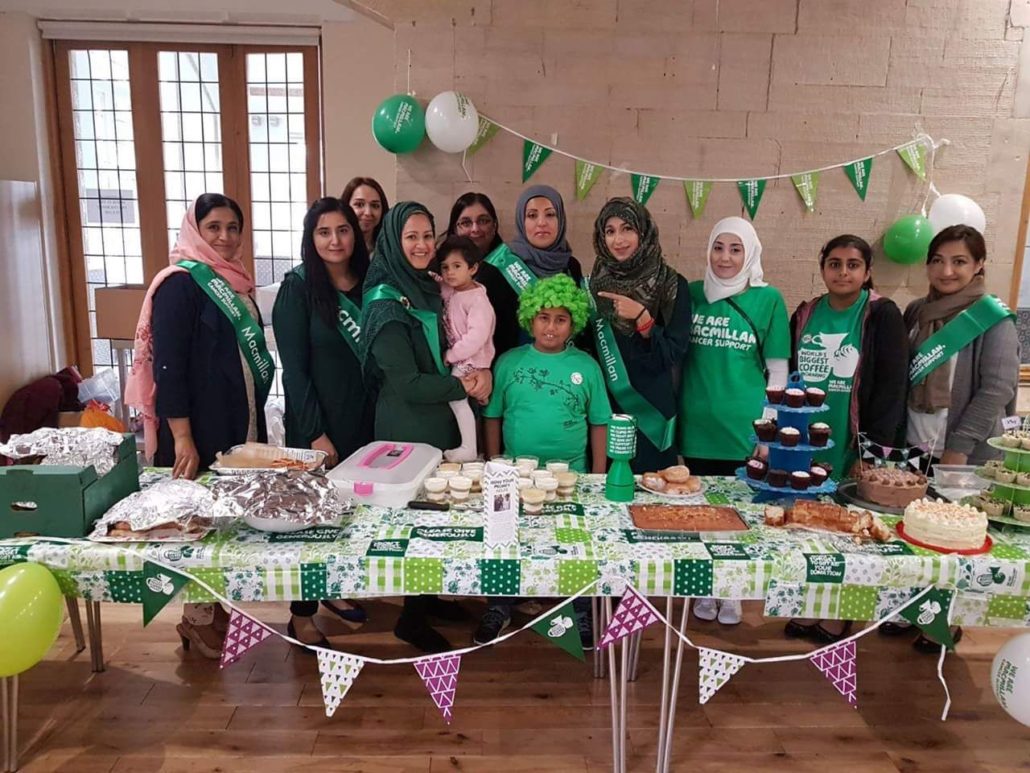 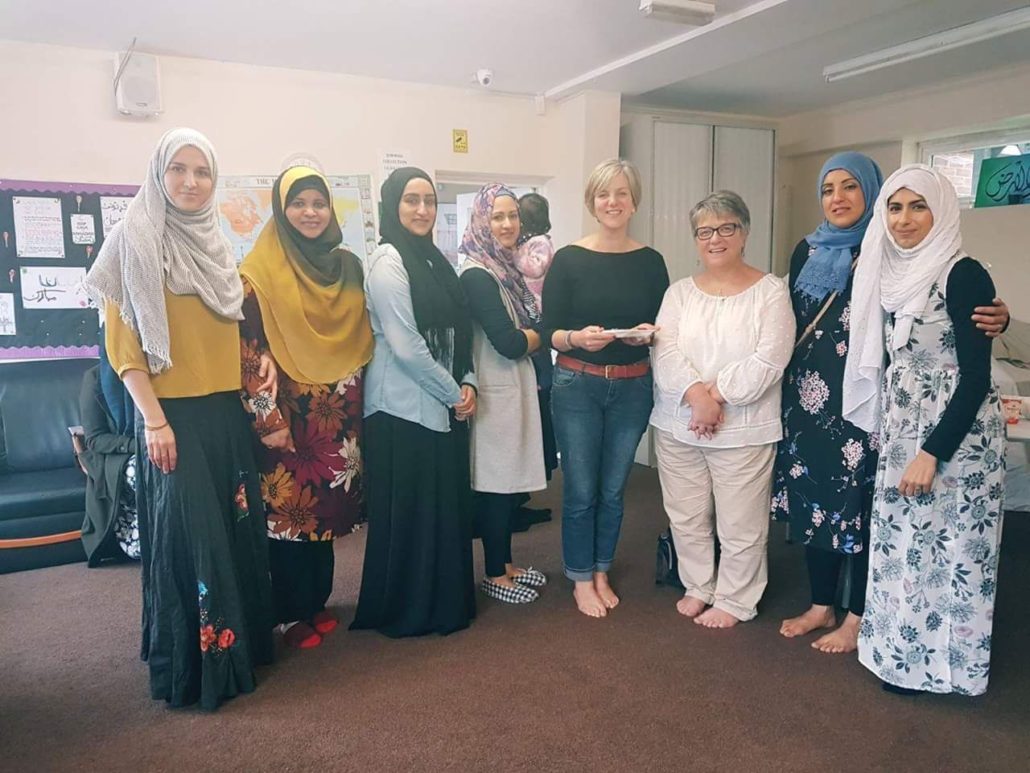 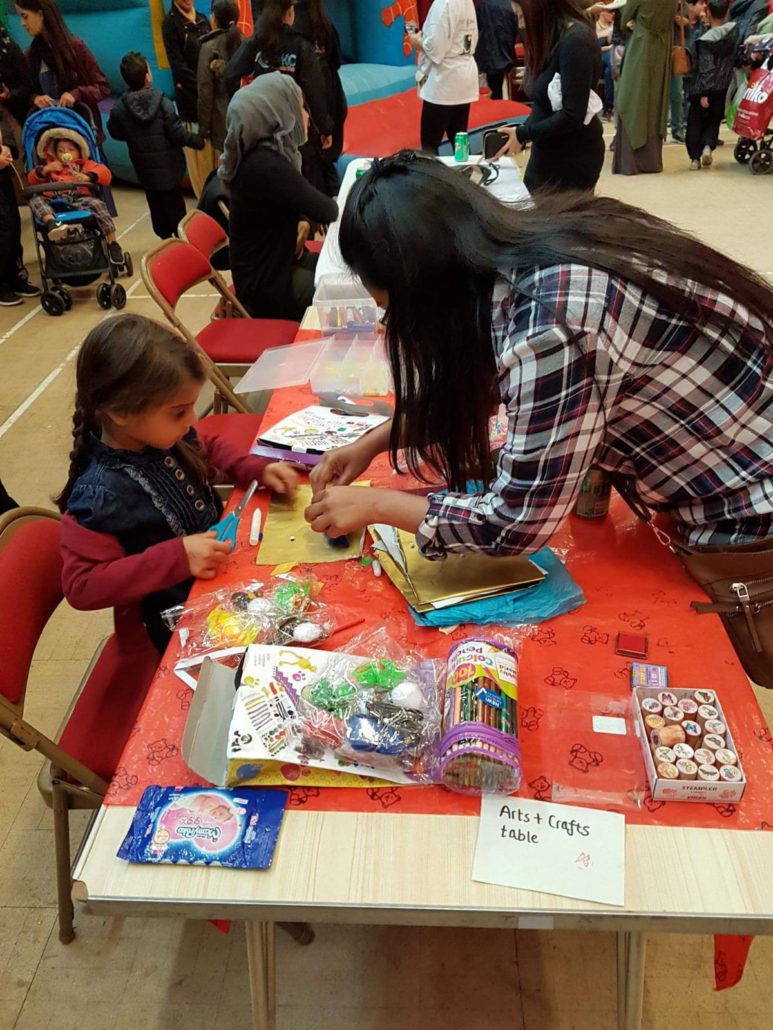 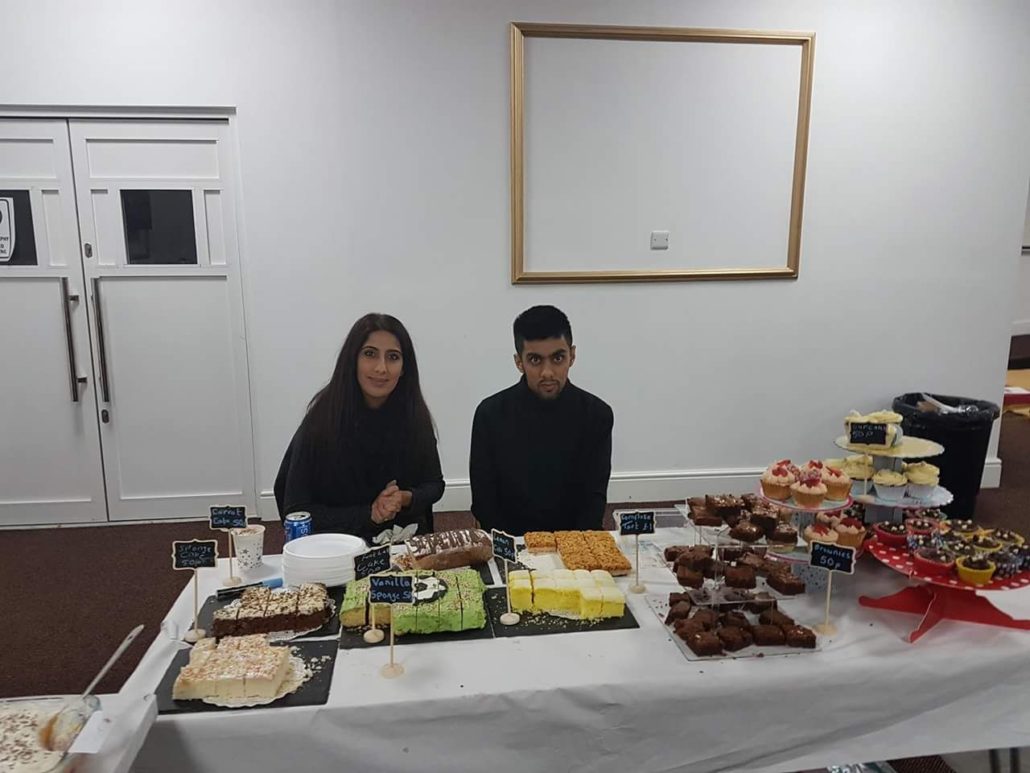 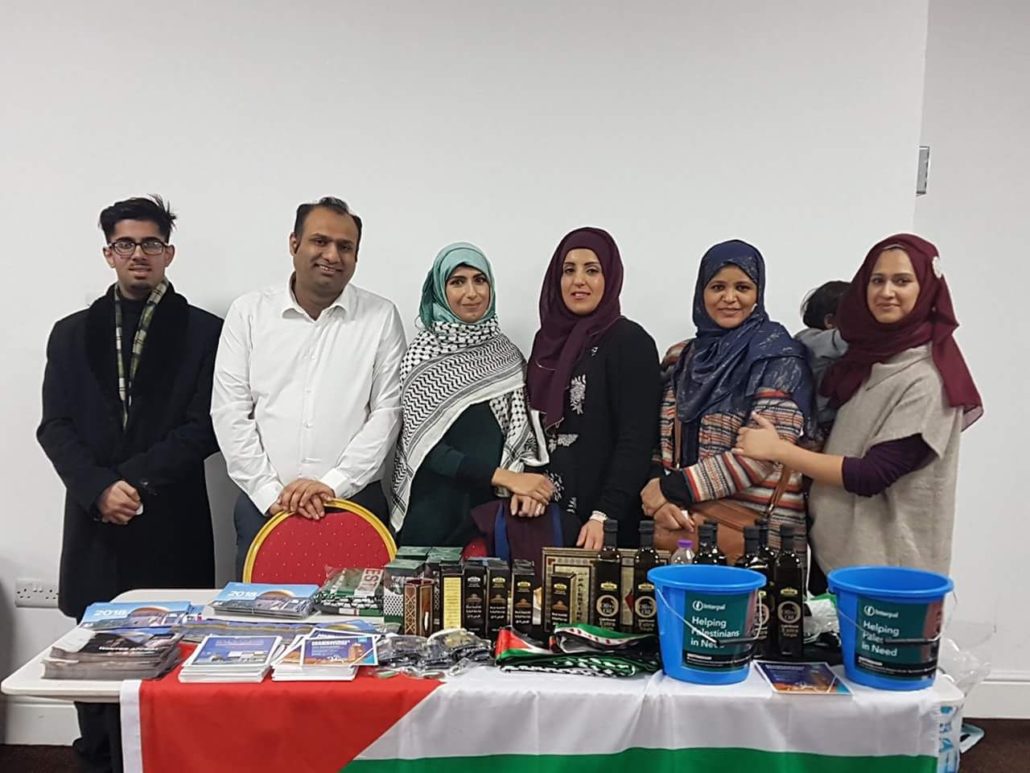 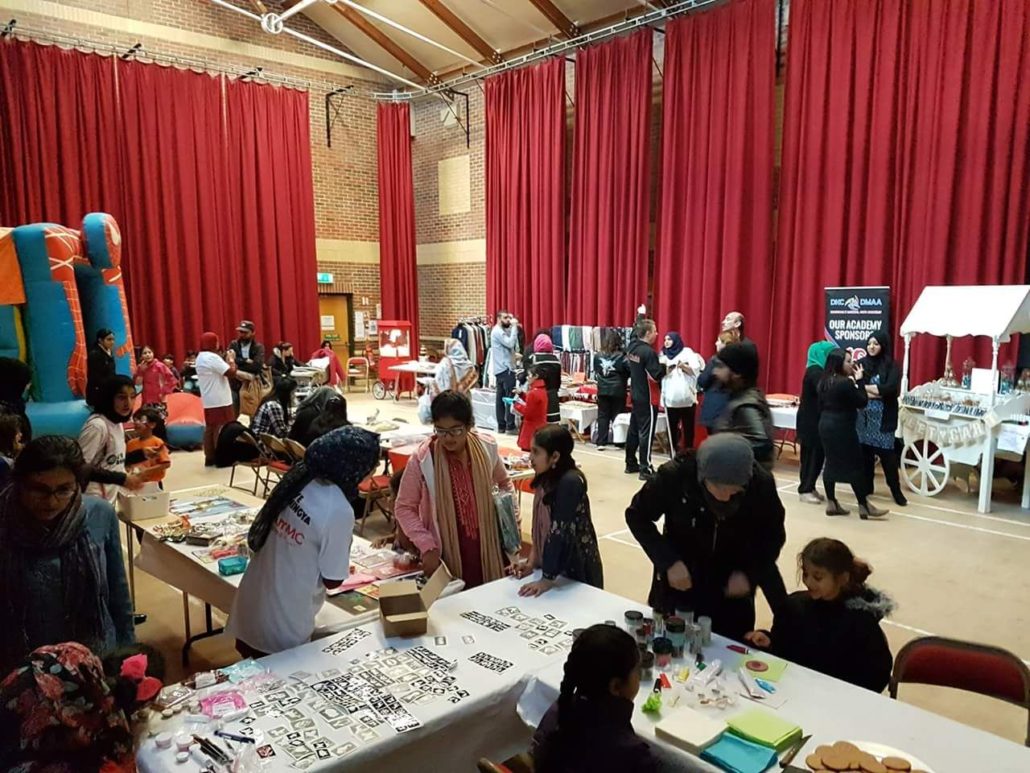 With our every Friday ongoing Coffee Morning service plus a few more brunches, we reached the hearts of many and continuously receive touching feedback.

We piloted our first Empowerment Course for women with diverse range of workshops delivered by inspirational role models in Nottingham. It was gladly received by women in the community.

We championed ‘Tackling poverty campaign’ encouraging our Muslim community to donate locally and we reappeared at the Salaam Shalom Soup Kitchen to serve the destitute community in Nottingham.

We organised a number of community events to promote Islam in a positive light including Ramadan Dinner for our Non Muslim Neighbours and Summer Fayer for wider community at Wollaton Mosque.

ANN team was on a roll with our fundraisers from September to December, we raised £700 for Macmillan Cancer Research, £2810 for Rohingya and £1575 for Interpal.

Lots of new and very excited volunteers supported us on most of the above projects.

I’ve been volunteering in my community since 2013. My goal was to meet Muslim women and children to connect and socialise with. I wanted to make friends and for my children to have other children to play with. I met people through different ways – work, baby groups, husbands friends but my heart was never content. I didn’t know why.

In October 2013, I decided that I had to do something – my faith has always been important part of me so I plucked up the courage to go my local mosque and be received by a warm and receptive Imam encouraging and supporting my ideas of getting more women and children into the mosque. This was the start of me finding myself, I worked relentellessy hard with many dedicated women on improving the services in mosques for women and children.

This journey has had a transformative effect on my life – I have learned so much about myself, about my faith and about the problems and issues people in my community face. I have had to learn to be resilient and tenacious to work in a heavily male dominated environment where subjugation and deeply entrenched cultural views have clouded what was the message of Muhammad (pbuh). I have learnt that life has so much more meaning than studying, work, raising children and dying. I have learnt that I must live up to my core values of being just, fair, honest and kind.

An-Nisa Network has become a group where women come and now seek solutions to issues they may face – isolation, self esteem issues, confidence issues, mental health, finding a sense of purpose, asking for spiritual guidance from faith leaders and the list is endless.

The environment we live in is becoming increasingly challenging for Muslim women – hate crime, Islamophobia, deeply entrenched cultural expectations in society and integration, discrimination – getting into the workplace and progressing. Muslim women are constantly under the spotlight.

Speaking for myself, my roots are from Pakistan but I am British. My faith is more important to me than being Pakistani. This is true for many second generation women . We turn to our faith leaders for guidance on the common issues we face but sadly I have witnessed faith leaders failing women leaving them with nowhere to turn to. The masajids are run on a patriarchy system where it seems that the priority is to keep erecting buildings to offer salah and it’s acceptable for the buildings then to remain empty. Barriers and blockages are common for the youth and women.

The challenges for Muslim women are endless – my question is where do Muslim women turn to for support? How can Muslim women live a fulfilled life and be supported and empowered through the ups and downs life throws at them? What needs to change in the workplace to allow women to progress and be successful contributors to our economy?

The current system -if one exists is failing Muslim women. Therefore, do Muslim women now need to front the change themselves and build a sisterhood in Nottingham to enable an infrastructure is in place to support women from all walks of lives? 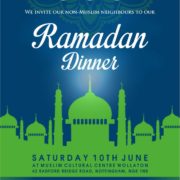 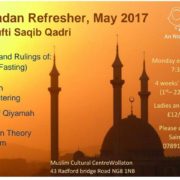 Scroll to top
We use cookies on our website to give you the most relevant experience by remembering your preferences and repeat visits. By clicking “Accept”, you consent to the use of ALL the cookies.
Cookie settingsACCEPT
Manage consent

This website uses cookies to improve your experience while you navigate through the website. Out of these, the cookies that are categorized as necessary are stored on your browser as they are essential for the working of basic functionalities of the website. We also use third-party cookies that help us analyze and understand how you use this website. These cookies will be stored in your browser only with your consent. You also have the option to opt-out of these cookies. But opting out of some of these cookies may affect your browsing experience.
Necessary Always Enabled
Necessary cookies are absolutely essential for the website to function properly. This category only includes cookies that ensures basic functionalities and security features of the website. These cookies do not store any personal information.
Non-necessary
Any cookies that may not be particularly necessary for the website to function and is used specifically to collect user personal data via analytics, ads, other embedded contents are termed as non-necessary cookies. It is mandatory to procure user consent prior to running these cookies on your website.
SAVE & ACCEPT